Green Party Energy Spokesperson Councillor Andrew Cooper was part of the EU Committee of the Regions Delegation attending the COP24 Climate Negotiations in Katovice Poland last week. He is a Councillor in Kirklees in West Yorkshire. Below is an extract from his blog about his involvement in last week’s Climate Talks in Poland. 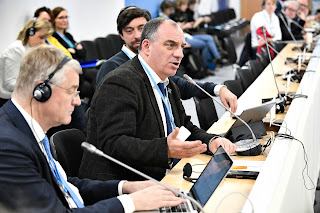 The COP24 Climate Talks took the important step of deciding how the Paris Climate goals of limiting Global Temperature increases to 1.5 degrees centigrade were to be achieved. The talks established the ‘Rulebook’ for achieving tough carbon reduction targets. Many have rightly been concerned at the lack of ambition in the final agreement and in particular the lack of recognition by the United Sates, Russian and Saudi Arabia who seem to put oil interests ahead of a safe climate for the people of the world.

Councillor Cooper said, “My mission at COP24 was to get more action at the local and regional level and push the United Nations to acknowledge the need for National Governments to do much more to reduce carbon emissions. What we knew before the climate talks was that National Governments had not agreed enough carbon savings to limit a global temperature rise below 1.5 degrees to ensure we had a reasonably stable climate to pass on to future generations.”

“Countries Carbon Emission targets are described under UN rules as Nationally Determined Contributions. I had proposed, and got EU backing, to call for a new category of Locally and Regionally Determined Contributions to encourage local and regional governments, below the State level, to take more action to reduce their carbon emissions. There was real progress towards this goal in the final statement signed up to by World Leaders in Katovice.”

There is now a statement in the final text on how to assess Nationally Determined Contributions that refers to preparing implementation plans to include “domestic institutional arrangements, public participation and engagement with local communities”. This statement gives a much greater role to Local Councils and Regional bodies in the UK and around the world.

Councillor Cooper said, “ I’m very pleased that we managed to get such a strong statement out of the COP24 Climate Talks from over 200 governments from around the world. In a UK Context we need to be asking what our Government will be doing now to work in partnership with Local Government and devolved administrations to help reduce carbon emissions. A growing number of Councils have now declaring a Climate Emergency following the IPCC Report that showed we have less than 12 years to reduce emissions to a level compatible with a stable climate. Now is the time to back up those declarations with solid actions.”